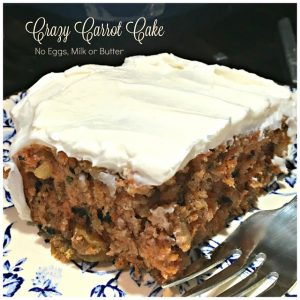 Bake on middle rack of oven for *35 to 45 minutes. Check with toothpick to make sure it comes out clean, remove when ready. Allow to cool and top with your favorite vanilla or cream cheese frosting. Enjoy!

Note: *Oven baking times may vary, be sure to check your cake to make sure you do not over bake. 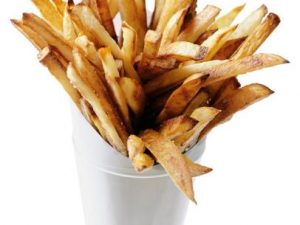 Preheat the oven to 450 degrees. In a large bowl, toss the potatoes with the oil and 1/2 teaspoon salt. Coat a baking sheet with cooking spray and spread the potatoes in a single layer. Bake until golden and crisp, about 35 minutes. Remove the fries with a spatula and season with salt. 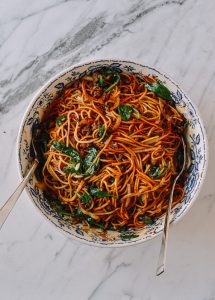 Bring a pot of water to a boil for the noodles. Meanwhile, heat the wok over high heat, and and add a tablespoon or two of oil. Add the ground meat, and stir-fry until browned and slightly crispy.

Add the onion and garlic, and continue to cook over high heat until the onions are slightly softened and browned at the edges. Stir in the spinach until it’s just wilted. Season with salt and pepper.

Meanwhile, cook the noodles according to the package directions. Add to a bowl, along with the soy sauce, dark soy sauce, sesame oil, honey, and chili oil (if using). Toss with the onion, meat, and spinach mixture. Serve!

put flour in a bowl, add salt mix lightly, pour in oil and mix with a fork about 30 stirs do not over mix.  Add ice water mix lightly, maybe 20 turns.  shape into a ball. roll between 2 pieces of wax paper dough sticks to wax paper * use parchment

This is our family’s favorite pie crust recipe! It can be used to make both sweet and savory recipes and is an absolute cinch to prepare! Let us know if you make it!

this is probably for a 9” pie, my pan is 10” and this is way short.  Next time double the recipe and use what is needed.  I used this for a tomato pie and it stood up very well the crust did not get soggy

1 1/2 times the recipe for a single crust