What is this?
It’s  a member of the predacious Reduviidae family of true bugs– Dr. Elliot Krafsur 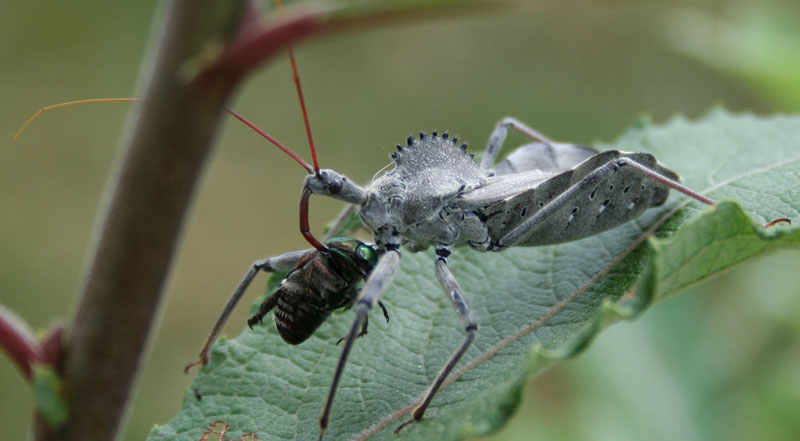 photo taken by me a few years ago.

DESCRIPTION: The wheel bug is one of the largest members of the family of insects known as assassin bugs. Most members of the family are predacious on other insects. The adult is brownish-black and about an inch long. It has a distinctive semi-circular crest behind the head which resembles half a cogwheel (thus the name wheel bug). The long, slender antennae, beak, and ends of the legs are reddish brown. The head is very narrow and slightly constricted behind the eyes forming a slender neck. Bending down and back from the front of the head is a rigid, 3-segmented beak. The nymphs are small and lack the cogwheel crest. Their abdomens are bright red and curl upward when they are young.

LIFE CYCLE: The wheel bug has one generation per year and overwinters as barrel-shaped eggs cemented together in masses of 10-40 eggs each which resemble honeycombs. The eggs hatch in May and June, and nymphs soon begin hunting for prey. Caterpillars are among their favorite meals. They molt several times and grow in size through the season. By late summer they are adults ready to mate and lay eggs.

TYPE OF DAMAGE: It is a beneficial ally of man.

CONTROL: Wheel bugs are beneficial insects and should be considered valuable allies. Do not handle them, however, as they can inflict a painful and lasting bite with their beak.

INTERESTING FACTS: The wheel bug (Arilus cristatus) is a monster of the insect world. With its bizarre appearance and deadly beak, it is a dreaded foe of other insects. The wheel bug spears its unfortunate host with its sharp beak and sucks up the victim’s body fluids.