1. Adjust oven rack to middle position and heat oven to 450 degrees. Dissolve 2 tablespoons salt in 1/2 cup water in large bowl. Place potatoes in bowl and toss so exteriors of potatoes are evenly moistened. Transfer potatoes to wire rack set in rimmed baking sheet and bake until center of largest potato registers 205 degrees, 45 minutes to 1 hour.
2. Remove potatoes from oven and brush tops and sides with olive oil. Return potatoes to oven and continue to bake for 10 minutes.
3. Remove potatoes from oven and, using paring knife, make 2 slits, forming X, in each potato. Using clean dish towel, hold ends and squeeze slightly to push flesh up and out. Immediately butter the potato generously. Season with salt and pepper to taste.  Add-ins can be used here or passed at table.  Serve immediately.

Pierce the potatoes with a fork a few times, then rub in the sunflower oil. Wrap each potato in foil, then bake in the oven for 1 ½ hours until softened.

Remove from the oven and carefully fold back the foil. Halve each potato and leave until cool enough to handle. Carefully scoop out the potato flesh from each half into a bowl, leaving about 1/4in remaining near the skin.

Mash the potato in the bowl, along with the vegan cream cheese and mustard. Stir in the chives, then load each potato skin with the filling. Place the filled halves in a roasting tin lined with baking parchment and return to the oven to bake for 20 minutes until golden on the top.

Remove from the oven and dash over the Worcestershire sauce. Season with sea salt and black pepper, garnish with a few extra chopped chives, and chive flowers when in season, if you like, and serve hot.

Beat eggs.  Add the cans of corn.  Melt and add the butter.  Add the onion and sour cream and two thirds of the cheese.  Stir in the Jiffy corn mix. Put in greased

casserole dish and spread the rest of the cheese on top.  Bake 350 degrees for an hour to an hour plus 10 minutes.

Test Kitchen tipsIf you’re in a rush, use prepared coleslaw mix.The apple and raisins add a natural sweetness, so there’s only a small amount of added sugar. 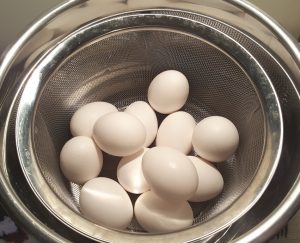