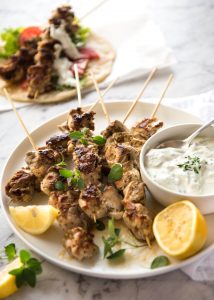 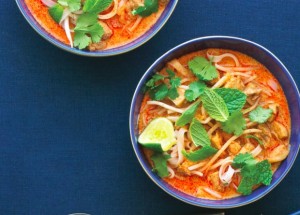 Leave it to West Coast guide to the good life, Sunset Magazine, to throw together a chicken laksa soup recipe so good we’d eat it in Southern California all summer.

The spicy Malaysian laksa soup may have a long list of ingredients, but it’s super easy. Malaysian kitchens (in Southeast Asia, in Southern California, and elsewhere) weave Chinese, Indian and Malay culinary strands into a complex cuisine.

For the sambal oelek chili paste:

*Find shrimp paste in the Asian-foods aisle of a well-stocked grocery store or at an Asian market.

combine everything and simmer for 5 min before adding seitan

1.2 c. chopped onion
1 tsp sea salt
1/2 tsp pepper
1 tsp poultry seasoning
1/3 c nutritional yeast
1 tsp oil
2 tsp fish sauce and 1 tsp worchestershire sauce( this a substitute for 4.5 tsp MSG which I do not use ( omit is you want this to be vegan)
garlic and parsley opitional
2 c water

combine all ingredients and simmer before adding seitan

Turn dough (seitan) out onto a clean surface and knead for 1 min. Cut dough into strips, breasts or any other shape, being mindful that it will more than double in size during cooking.

Bring simmering liquid to a boil add seitan, then reduce heat to low and simmer with lid slightly ajar for 50 min. to 1 hour, stirring every 10 – 15 min. Save any excess liquid.

You can stop here if making spedies.

if you are using the seitan as cutlets, preheat oven to 350 Grease a large cookie sheet, do not let the pieces touch.

Flip over halfway through cooking time.

To make gravy, add up to 1 c. non- dairy milk to the leftover cooking liquid then heat over medium heat, adding salt and pepper.

I used Imagine Foods’ No-Chicken Broth to mimic the taste of chicken, but any vegetable broth may be used.

Tear off 4 pieces of aluminum foil about 10 inches long. (See tips below for a foil-free way of making the scaloppine). Begin heating water in a steamer.

In a large bowl, mix the vital wheat gluten with the nutritional yeast, onion powder, salt, and basil. In a smaller bowl, whisk together the broth and tahini (or cashew butter). Stir the wet mixture into the dry until well blended. Knead gently 10 times. Quickly divide dough into 4 equal pieces.

Take a piece of dough and shape and flatten it into a thin oval cutlet. Place it on a sheet of foil, a little higher than center. Fold the bottom of the foil over to meet the top, and then fold the two edges over about 1/2 inch to form a seam. Continue folding the foil by half inches until it reaches just above the cutlet. Flatten the cutlet down a little more, and then fold the left and right edges in the same way until the packet is snug around the cutlet. Repeat with all pieces of dough.

Place the packets flat into the steamer and cover. Steam for 25 minutes. Keep packets sealed until you’re ready to use them.

Spray a non-stick skillet (or some other non-iron skillet) with olive oil. Begin heating it as you prepare a plate containing the flour sprinkled with a little salt and pepper. Once the skillet is hot, unwrap each cutlet and lightly dredge each side in the flour and then place in the skillet. Cook until brown and then turn over and brown other side. Remove to a plate.

(If you’d rather not use any oil at all, skip the flouring of the cutlets and just brown them alone. Your sauce may not thicken unless you add a little flour to it later.)

Add the garlic and lemon slices to the pan. Cook until the lemon slices have softened, 2-3 minutes, and then remove them from the pan, leaving the garlic. Add the olives, broth, wine, and lemon juice and cook on medium heat until the liquid starts to reduce. Remove the garlic, add salt and pepper to taste, and return the cutlets to the pan. Turn them over to coat with the sauce. Simmer briefly to warm them through, and if the sauce becomes too thick, add a little broth to thin. Stir in the parsley, and remove the cutlets to plates. Spoon some sauce over each cutlet and garnish with lemon slices.

I found two different tricks that resulted in a cutlet that was a little moister. Unfortunately, one of them requires an extra step, simmering the seitan in broth for a few minutes after it comes out of the steamer. If you’d like to do this, just put the cutlets in a skillet, add broth to about halfway over them, and simmer, turning, for 3-5 minutes. The cutlets will absorb a lot of the broth, so be ready to add more as necessary. Once they’re done, remove them from the broth and proceed with the recipe.

No extra step is required for the other technique; in fact, it’s simpler than the original recipe, though you will need a large steamer and plates that will fit inside it. Instead of wrapping the cutlets in foil, place them on the largest plate that will fit in your steamer. (If you have a double-level steamer, you can place two cutlets on smaller plates on each level.) Cover with an inverted plate of the same size, to keep water from dripping directly onto your cutlets. Steam for 25 minutes. Your cutlets will be a little lighter in color but will have a moister texture. This is my preferred way of making these cutlets!