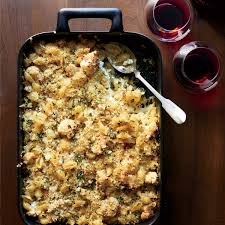 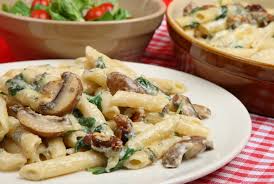 Bring a large pot of generously salted water to boil.

Heat 1 tablespoon olive oil in a large pan or skillet over medium heat and saute mushrooms, seasoned with salt and covered, for 15-20 minutes, or until softened.
Stir occasionally and reduce heat if mushrooms start to burn.

Add spinach to mushrooms and pour in lemon juice. Cook until wilted, then add walnuts.
Cook pasta according to packaging directions, or until al dente. Drain (reserving 1/2 cup pasta water) and set aside.

Add heavy cream to the spinach and mushrooms, stirring well, and mix in Parmesan cheese. If sauce is too thick, add pasta water one tablespoon at a time.
Taste and season with salt and pepper, if necessary.

Pour drained pasta into the sauce and toss well to coat thoroughly. Cook on low heat for 5 minutes, or until sauce thickens and sticks to pasta. 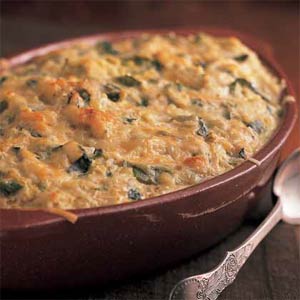 dmv note:  I halved the recipe, used yellow squash and cubed brie it was quite tasty. 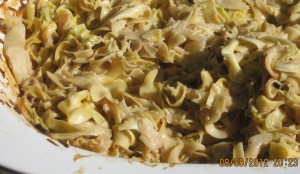 Heat butter or oil in a large skillet over medium-low heat. Add onion and scallions, sauté 10 minutes or until very tender. Add mushrooms, salt, pepper,  sauté 10 minutes until mushrooms are tender and limp. If liquid remains in pan, cook over high heat, stirring, 2 minutes until it evaporates.   Add broth or wine and simmer for 5 min.

Cook noodles uncovered in a large pan of boiling salted water over high heat 4 minutes or until nearly tender but firmer than usual. Transfer to a large bowl.

Grease an 8″  baking dish and add noodle mixture. Bake until firm and golden brown, about 45 minutes. Makes 4 to 6 servings. 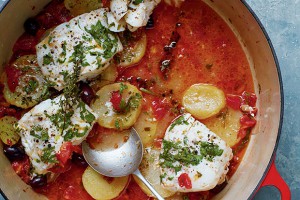 Heat the oven to 350°F (175°C). In a medium saucepan of boiling water, cook the potatoes until tender, about 20 minutes. Drain and let cool slightly, then peel and cut into slices 1/4 inch (6 mm) thick.

In a medium enameled cast-iron casserole, spread the potato slices, tomatoes, chorizo, olives, and garlic. Set the fish on top and add the thyme, parsley, butter, oil, and lemon juice. Season with salt and pepper. Cover and bring to a simmer on the stove, then transfer the pot to the oven and cook until the fish is just opaque throughout, 10 to 15 minutes. Serve directly from the casserole.

Make Ahead
The casserole can be assembled and refrigerated for up to 4 hours before baking. 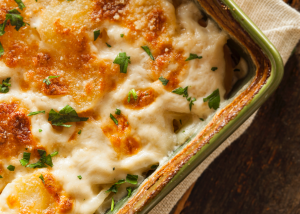 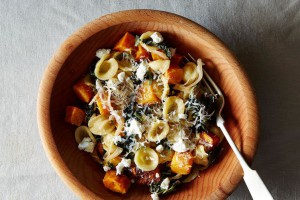 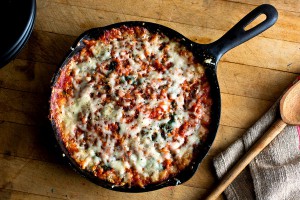 1. Bring 2 cups water to a boil in a medium saucepan. Add the bulgur and salt to taste, reduce the heat, cover and simmer 15 to 20 minutes, until the water is absorbed. Remove from the heat, uncover and place a clean dish towel over the pan, then replace the lid. Allow to sit undisturbed for 10 minutes or longer. Transfer to a large bowl.

2. Pulse the tomatoes with their juice in a food processor. Heat 1 tablespoon of the olive oil over medium heat in a large, wide skillet or a shallow 3-quart saucepan and add the garlic. Cook, stirring, until fragrant, about 30 seconds, and add the tomatoes, sugar, salt to taste, and allspice or cinnamon. Bring to a simmer, reduce the heat to medium-low, and simmer until the tomatoes have cooked down to a fragrant sauce, about 20 minutes. Taste, adjust salt and add freshly ground pepper.

3. Steam the spinach until it wilts, 1 to 2 minutes, rinse briefly with cold water and squeeze out excess water. Do this by the handful to get out all the water. Chop coarsely. Add to the bulgur. Add the mint and the chickpeas if using, 1 tablespoon of olive oil and 1/2 cup of the tomato sauce and toss together.

4. Preheat the oven to 350 degrees. Oil a 2-quart gratin or baking dish. Spread the bulgur mixture in the dish in an even layer. Top with the remaining tomato sauce. Sprinkle on the cheese. Drizzle on the last tablespoon of olive oil. Bake 30 minutes, or until the top is lightly browned. Remove from the heat and allow to sit for 10 minutes before serving.  Yield: Serves 6

Variation: Substitute feta for the Gruyère. 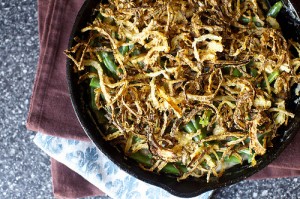